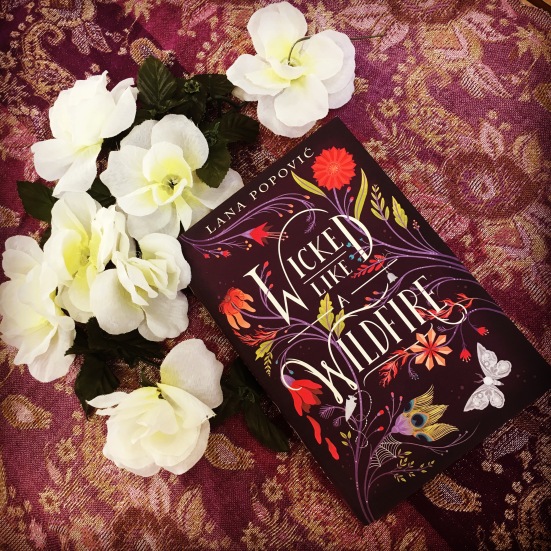 ‘Wicked Like a Wildfire’ was beautiful both inside and out. From the moment it revealed itself from my black Fairyloot bag as part of the Otherworlds box, my hopes and expectations were sky high and for me – it did not disappoint!

The story follows two sisters, Iris and Malina, who have to hide their ancestral, ‘gleaming’ magical abilities from the other residents of their coastal Montenegrin village, Cattaro. Iris has the ability to fractalise (I think I made that word up!) flowers and turn them into intricate glassworks whereas Lina is able to read or create moods and emotions through music, epitomising the idea of mood music. When their mother is mysteriously attacked and disappears, the two sisters must work together to discover the truth behind their powers and heritage along with the strange curse which haunts their family line.

Familial relationships are at the heart and soul of this book. Whilst I don’t have any sisters to relate Iris and Lina’s bond to, Popović did a brilliant job of conveying the deep meaning of sisterhood between different generations of characters within the book. This makes the lengths and sacrifices characters must face all the more believable. One relationship which did resonate with me was the one between Iris and her mother. Now whilst I wasn’t quite following the traits of Iris in my teenage years, the friction between the pair definitely brought about a sense of nostalgia for my own relationship with my mother. The battle between trying to be yourself yet match up to another’s expectation brought back quite a lot of feelings from my own childhood and instantly allowed me to connect with Iris.

Other relationships in the book are equally well developed and explored. The romance is not overdone or overshadowing of the main plot whilst still allowing the characters to move forward within the story. The diverse sexualities of characters are written with a subtle innocence which enables the sisters to be honest and true to themselves as well as giving them the courage to stand up for what they believe in and desire most.
One warning – keep a track of the names of the characters. Without giving any spoilers away, the character names are used as a brilliant plot device within the novel and I did have to make a conscious effort to try and keep up with which one was which!

To say this book is a feast for all the senses is a bit of an understatement. Now Wicked Like a Wildfire does have a kind of marmite feeling about it; if you absolutely devour description and world building then you should be enchanted by what Popović has written. The themes of magic and beauty which run throughout this whole narrative are enriched by the pure levels of sensory description which leap off every page. From every sight, to every taste, to every smell, Lana’s world really does come alive in your mind and completely encompassed me, so much so that I felt like I was there with them on their journey. Although set in the modern day, I imagine Iris and Malina’s world as something out of a pre-Raphaelite painting. The symbolism and descriptions from when they ‘eat the moon’ or gleam their magic is so kaleidoscopic and detailed that it becomes emblazoned in the back of your mind and the lightness of it drastically balances out the evil and darkness coming from the curse and villainous elements of the story.

I was thrilled when I found out that Cattaro is actually a real-life place and is known as Kotor in Montenegro. When reading books set in actual places I often Google some of the main landmarks and the setting, just to get a better picture of the character’s world. Appealing to my love of history and architecture, Popović has given stunning representations of locations such as the old town of Kotor as well as the religious buildings Our Lady of the Rocks and the Abbey of St. George on islets near Perast. Before reading Wicked Like a Wildfire, Montenegro was not really a place where I felt compelled to visit, however after Popović has so expertly brought the place to life on the page it has definitely been added to my travel bucket list.

Yes, the pace and detailed, descriptive nature of this book may not suit every reader, but there are many many things which I love about this story and the way it all comes together. I enjoyed the pace and the length of time spent building this magical world and the deep relationships between the characters; I enjoyed that I could explore the historical Montenegrin settings through the experiences of Malina and Iris, and writing which made it pop right off the page; I enjoyed the aspects of magic and the way it was intrinsically linked with beauty and nature; I enjoyed the fairytale-like qualities of the story and the elements of Balkan folklore which become prevalent towards the end; I enjoy that I have questions which are left unanswered at the end, but moreover, above anything else, I adored the sense of escape and wonder that this book allowed me to feel.

Roll on Fierce Like a Firestorm. If it’s anywhere near as good as Wicked Like a Wildfire, then I’m sure it will be one compelling ride!

One thought on “Beauty of the Wildfire”