It has been such a wonderful morning so far. (Non-bookish related) but I have a few shares in some racehorses at a local stable yard and today was the first time since lockdown has been lifted that I’ve been able to go down to the gallops and spend some proper time with the horses and the family that run the yard. It was a ridiculously early start to be down there for 7am but it was all worth it. Afterwards I got to see some of the baby foals at another owner’s nearby stud so it’s been a truly wonderful start to the weekend filled with lots of horse-love! 😍

The Summer holidays are only a week away and I’m already beginning to think about all of the different reading goals I want to try and accomplish during the break.
[All title links go to Goodreads, synopses also from Goodreads.]

I have three ARCs from NetGalley to read:

Synopsis: When fifteen-year-old Esme Silver objects at her father’s wedding, her protest is dismissed as the action of a stubborn, selfish teenager. Everyone else has accepted the loss of Esme’s mother, Ariane – so why can’t she?
But Esme is suspicious. She is sure that others are covering up the real reason for her mother’s disappearance – that ‘lost at sea’ is code for something more terrible, something she has a right to know. 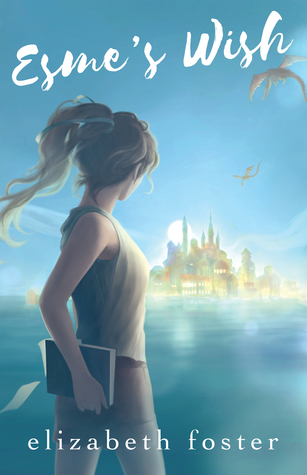 After Esme is accidentally swept into the enchanted world of Aeolia, the truth begins to unfold. With her newfound friends, Daniel and Lillian, Esme retraces her mother’s steps in the glittering canal city of Esperance, untangling the threads of Ariane’s double life. But the more Esme discovers about her mother, the more she questions whether she really knew her at all.
Winner of a Purple Dragonfly Book Award for best fantasy.

Next up I have a NA Dark Fantasy called The Mist Keeper’s Apprentice by E.S. Barrison

Synopsis: Storytelling was outlawed. Magic had all but vanished.
That all changed when the woman in black came to town.
Branded with the black stamp at a young age, Brent thought he would end up a vagrant like his father. His craft was telling stories, but the Order had long forbidden any weaving of tales. When Brent sees the woman in black, she leads him into a menagerie of tunnels beneath the earth where his life falls into the nauseating, but beautiful, mist of the dead.
He finds friendship in Rho, a young woman who hides her face with a tree branch while roots and vines bow to her every whim. Together, they embark on a journey to explore the world, escape the watchful eyes of the Order, and discover the woman in black’s secrets.
For thousands of years, the mist and the tunnels were under the sole guardianship of the Council of Mist Keepers. But as new monsters enter the mist, and magic is forced out of the shadows, the Council searches for young blood to join their ranks and Brent’s next in line.

I’d also like to explore the sequel to A Touch of Death, A History of Madness in The Outlands Pentalogy which I started earlier this year for author Rebecca Crunden. You can read my spoiler-free review of the first book in the series here!

So this is not an ‘official readathon’ thing, but after being heartbroken at hearing of Zafón’s death last month I decided it was time to revisit and reread all of his books, in particular the Cemetery of Forgotten Books series. Zafón is one of my all-time favourite writers and I would auto-buy all of his books without even reading the blurb. I’m hoping to go right back to The Shadow of the Wind and finish with the last book he wrote The Labyrinth of the Spirits (which I have yet to read so it will still be a surprise!).

Not forgetting the actual TBR pile…

With an influx of Fairloot boxes due to the Corona backlog and my birthday book haul from May, I have a stack of books and series which I was hoping to start reading. Some of these include:

There’s always plenty to read as they say…
I know that I’m going to be nowhere near achieving all of these! I’m such a mood reader at the best and worst of times so I’ll probably float through the various challenges I’ve set for myself or even invent something new should I get stuck in a slump… especially as we are nearing the final stage of our house renovations before (FINALLY) moving – and all of the school work, recovery curriculums and new risk assessments which will need doing before all of the kids return in September. It’s going to be a pretty busy summer!

What are your summer reading goals? Do you have a set TBR list of are you more of a mood reader? What three books are you looking forward to reading next from your TBR? As always, drop me a comment to chat!

Have a lovely rest of the weekend everyone!